Midsouth Makers will be hosting a table at MidSouthCon, the region's oldest general science fiction/fantasy convention. The fan tables are on the 2nd floor, right in the middle of 75% of programming and gaming areas, so we will see high traffic at times.

MidSouthCon has grown over the years to become the Mid-South's premier multi-genre convention. It covers a diverse section of fanish culture that includes Science Fiction, Fantasy, Science, Comics, Horror, Education, Costuming, Anime, and Gaming. There are over 100 authors, editors, publishers, scientists, artists and other guests, with an annual attendance of approximately 1200 people.

On average there is over 140 hours of programing in multiple tracks during the Con (and that's not counting the Video Room, Anime Room or gaming tracks). Masquerade, Writers' Conference, Readings, Autographs, Dealers' Room, SCA demonstrations and events, Board Games, Role-playing and LARP games, CCG tournaments, and lots of other fun stuff. 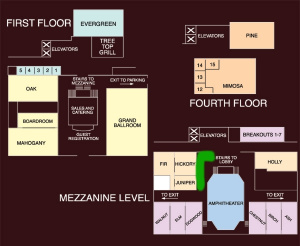 The green marking is roughly where our table will be